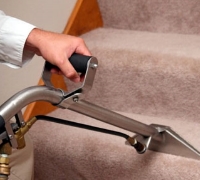 I am allergic to some detergents but the cleaners were to nice to explain every detail. Next time, when I need a carpet cleaning, I would like to hire the same team.
- Maya

Great attitude, experienced workers, up - to date cleaning equipment. I am totally amazed by your professionalism. Still can't believe that I got my carpets ideally clean at such a low price.
- Jayden